I recently interviewed Liz Crokin and this interview changed my paradigm on the Russian allegations against Trump. During the course of the interview, Liz Crokin stated that the pedophilia has invaded every government in the West. Putin is opposed as is Trump and they intend to work together on this issue. I set out to see if her statements were accurate and here is a cross-section of what I found:

“Obviously pedophiles, Neocons, and other New World Order agents will never forgive Putin because he is making those people look really bad. If those people are pursuing a satanic ideology, says Putin, then they are in “the path to degradation.”

“Many Western states have taken the way where they deny or reject their own roots, including their Christian roots which form the basis of Western civilization. In these countries, the moral basis and any traditional identity are being denied – national, religious, cultural and even gender identities are being denied or relativized.”

“In a rarely seen speech, Putin states that there is a moral crisis occurring in the west and it is one that is purposely created by governments.

In short, the moral foundations of objective right and wrong often linked to Christendom have eroded.

In their place the imperial oligarchs have erected a system that reverses what is good and replaces it with propaganda that leads to cultural decay and erasure of identity, according to Putin.

He suggests that traditional faith in God has been replaced by Satanism. It sounds crazy enough, but then again, there does seem to be at least some degree of affinity for occult religious practices among certain politically connected individuals. Whether it is “Satanism” or something altogether different, is a question we will leave others to decide.

He says parties which “promote the propaganda of pedophilia” have been seriously considered as legitimate due to the excesses of political correctness.”

This make me want to invite Putin over for dinner. His views are decidedly consistent and I have found evidenced that he has been making statements similar to these statements printed here, for years.

Putin took the bold step of banning US adoptions of Russian children because of the real threat that these childre will end up being sex-trafficked by elite pedophile rings that are sanctioned, by the failure of the American government to fully prosecute these rings for their crimes.

Vladimir Putin has issued an immediate ban on U.S. adults adopting Russian children over fears for the safety of the children due to the pedophilia epidemic plaguing the United States.
“The law, which was passed emphatically by both houses of the Duma, raised eyebrows in Russia, however Putin explained “the country will not be responsible” for the abuse of their children at the hands of pedophiles.

Americans adopt children from abroad more often that citizens of any other country in the world, and while the vast majority may have honorable intentions, there is increasing evidence that an elite pedophile ring uses adoption to enter children into child sex trafficking, with many of the children disappearing without a trace. D.C. children most at risk.

What About Donald Trump?

Did you know that in Trump’s first 30 days in office, his people, mainly Attorney General Jeff Sessions, prosecuted 1,500 sex traffickers? 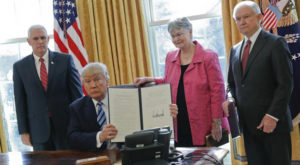 “This should be one of the biggest stories in the national news. Instead, the mainstream media has barely, if at all, covered any of these mass pedophile arrests. This begs the question – why?” Liz Crokin wrote for Townhall.com on Feb. 25.

The numbers are “staggering” when compared to the less than 400 sex trafficking-related arrests made in 2014 according to the FBI.

My guest from this previous Sunday night was fired by Townhall, shortly after running this piece on Trump and his intent on going after pedophiles. Liz told me in a private conversation that she was told by Townhall officials that they would never cover the subject again even if the President made it a news item. This opens up a whole can of worms about this publication. Liz Crokin felt compelled to flee the country for her safety and just recently returned shortly before appearing on The Common Sense Show on May 13, 2017.

I covered this same topic on the same date as Liz Crokin.  The day before, President Trump announced that he was initiating a bold new initiative to go after child-sex-traffickers. I ran a video of the announcement on my Feb. 25th article. However, the video, a major announcement by the President of the United States has been scrubbed from the Internet. Any questions?

I have had a paradigm shift in my thinking regarding the establishment incessant and ridiculous Russian-collusion allegations against Trump.

On my show, Liz Crokin stated that she was aware of a clear intent for Trump and Putin to work together to exterminate pedophilia from their respective countries. The previous evidence presented in this article speaks to this clear intent with regard to the direction both leaders are taking.

The obvious goal of Deep State establishment is to keep the two world leaders apart on this issue because it exposes the raw evil that permeates our Deep State. Putin knows it, Trump knows, Liz Crokin knows it and now you know it. Please keep in mind that the articles that I cited for this article are merely a small representation of the large body of evidence that backsup these claims.

The clear intent of the Deep State is not to just get Donald Trump impeached over the Russian collusion allegation, but to keep the 2 men apart.

In my interview with Crokin, she delved deeply into this topic. This interview should be downloaded and shared among the masses. Here is the interview about the most heinous crime on the face of the planet.