While Susan Duclos and I several years ago were fortunate enough to purchase a little bit of long-term survival food just in case of an emergency, and that supply still sits mainly untouched just in case SHTF in the coming days/weeks/months as Americans begin to get a little bit of a better grasp of what’s now unfolding with panic shopping hitting stores from ‘Sea to Shining Sea’, we’ll still hit the grocery store weekly to get enough food to last us a few weeks and upon doing so Friday, learned some news that has to be reported here and now.

Although I was just at the store this past Monday and noticed no shortages or problems at all, I was given a hint of things to come by one of the store’s employees who Susan and I have become friendly with over the last several years and who told me that over that past weekend, lots of people from out of the area came to that store to stock up on things like hand sanitizer and toilet paper since stores in their own regions were already out of that stuff.

Well going to the store again on Friday was a totally different beast. While there was still plenty of food, ALL of the toilet paper was gone this time, just as Susan Duclos had reported was happening around the country in this ANP story, but MUCH more concerning was my conversation with that same employee who told me that the US government was now handling all the food and supplies distribution to grocery stores.

With that confirmation alone giving us just another hint about where this all has the potential to go, with the US government also long stockpiling for a pandemic as reported in this recent SHTFPlan story, this employee also told me it was a concern that they weren’t able to get their full, normal shipment ordered due to government now controlling where food goes because, as had happened the previous weekend, people were ditching the city stores to come out to the country stores where many fewer people were, also giving us a hint of where this might go should ‘S’ really ‘HTF’ in the days and weeks ahead.

With the Washington DC/Baltimore area ‘city folks’ sure to ‘bug out’ to the mountains and the country where many fewer people live and ‘the virus’ hadn’t yet arrived giving us a hint of what might be ahead (when I lived in the city, I had my bugout route to the mountains already planned out so why wouldn’t others?), we’ll go ahead and explore all of the latest signs of potential trouble ahead including this November of 2019 job posting at the CDC requesting ‘public health advisors’ for a ‘quarantine program’, the same kinds of programs we’re now seeing spring up across America and the world.

(ANP NEEDS YOUR HELP! Due to unforseen medical expenses following Susan Duclos’ heart attacks and hospitalization, All News Pipeline will need some financial help in the days, weeks and months ahead. So if you like stories like this, please consider donating to ANP to help keep us in this ‘Info-war’ for America at a time of systematic censorship and widespread corruption.)

As mentioned in the last paragraph of this story above, the Center’s For Disease Control in America was looking for ‘public health advisors’ for a quarantine program back in November of 2019 and as we see in a small snippet of that job posting we’ve embedded above, many of the cities listed as job locations are now being hard struck by coronavirus.

From Dallas, Texas to Seattle, Washington to Los Angeles, California to Miami, Florida to Boston, Massachusetts to NY City and the entire state of New York and beyond, almost every city we see listed as job locations for public health advisors for a quarantine program either may soon need to or are now setting up quarantine programs. And while we’re unable to absolutely confirm CDC pre-knowledge of a coming pandemic, the Wuhan coronavirus timeline provides an interesting tidbit reporting the first coronavirus patient discovered there was on November 17th, two days after the CDC job announcement was made. The CDC job announcement saved at archive here. Yet as Susan Duclos pointed out, maybe the CDC was just doing their jobs, recognizing an unfolding public health crisis in China while even the Chinese government was hiding it.

So while there is the possibility that said job announcement in the aformentioned cities was simply ‘good timing’ with the CDC also now declaring that in a worst case scenario, 214 million Americans could be infected with the virus and now a Johns Hopkins professor telling us ‘don’t believe the numbers you see; likely 500,000 Americans are already infected with coronavirus’, all hell could break loose in America over the next several months if we witness here what we’ve also witnessed and reported upon in China. From Yahoo News.

According to Dr. Marty Makary, a medical professor at Johns Hopkins University, the coronavirus is something that “people need to take seriously.”

“I’m concerned when I hear a neighbor or a friend say that they’re planning to go to a kid’s swim meet in three weeks or going on vacation next week,” Makary said on Yahoo Finance’s “On the Move” on Friday.

“No — we’re about to experience the worst public health epidemic since polio.”

In the U.S. there are over 1,600 confirmed cases, according to the Centers for Disease Control and Prevention (CDC), with 41 deaths. Makary said that the number of cases, though, is likely much higher.

“Don’t believe the numbers when you see, even on our Johns Hopkins website, that 1,600 Americans have the virus,” he said. “No, that means 1,600 got the test, tested positive.

There are probably 25 to 50 people who have the virus for every one person who is confirmed.”

He added: “I think we have between 50,000 and half a million cases right now walking around in the United States.”

Part of the reason the number of cases might be higher without people realizing it is because of the shortage of coronavirus testing kits from the CDC. 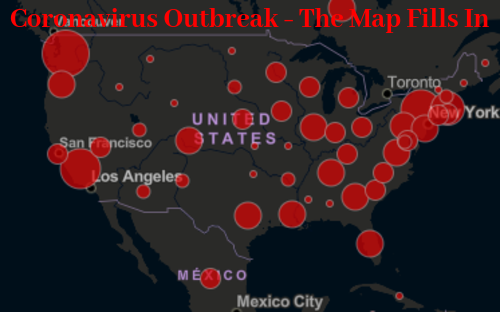 Although Washington DC schools have been closed to stop the spread of the virus, bars in DC remain wide open and they are being packed with people who clearly won’t be following any ‘social distancing guidelines’.

And while NY Governor Andrew Cuomo has banned public gatherings of over 500 people, that might be 498 people too many with this virus spreading like wildfire wherever it has hit, almost leading us to believe Mike Adams is right on the money in this March 12th story over at Natural News titled “They’re TRYING to spread it! Sacramento County announces ending all 14-day quarantines and releasing high-risk people into the general public”.

Now we know the anti-Trump liberals in America are literally trying to spread the virus and make the outbreak worse. Three days ago, Sacramento County announced it was ending all 14-day quarantines of high-risk people who had come into direct contact with coronavirus patients. This is being described by the county as a “shift from containment to mitigation,” meaning they are declaring there’s no longer any point in trying to contain the outbreak (even though they have only 10 confirmed cases in the entire county).

The policy is criminally insane. It flies in the face of every principle of infectious disease containment known to the modern world. This tactic from Sacramento County is ripped right out of the 17th century and smacks of deliberate sabotage to try to spread the virus and worsen the outbreak.

As we had reported on ANP all the way back on February 1st in this story titled “Locking Down America & The Globalists End Game: Due To The ‘Nature Of The Beast’, Completely Stopping A Coronavirus Pandemic May Require ‘Shutting Down Society'”, due to the nature of COVID-19, shutting down the entire county might be the only way to stop its spread. From this Daily Mail story.

The Centers for Disease Control and Prevention (CDC) has projected in a worst-case scenario that up to 65 percent of Americans could be infected with coronavirus.

According to The New York Times, a closed-door meeting was held last month among CDC officials and dozens of epidemic experts from around the world.

One of the CDC’s leading epidemiologists presented four scenarios – named A, B, C and D – to show possible ways the virus could spread throughout the US population.

The federal health agency projects that in the worst-case scenario, between 160 million and 214 million people would be sickened.

So while we’re very happy to read in our comment sections that so many ANP readers are prepared for the arrival of coronavirus in their own neighborhood’s, we hope that everybody is also prepared to ‘hunker down and stay in’ for a while if needed while hoping that if that is the case, you’ll spend a lot of time here with Susan and I and other ANP readers at ANP. In the first video below, Dr. Francis Boyle, who has warned COVID-19 is a bioweapon, joins Dr. Mercola to talk with us about the coronavirus outbreak while in the 2nd and final video below, Mike Adams warns that we could very easily soon see a ‘coronavirus lockdown’ here in America, just as we witnessed in China and are witnessing more recently in Italy.